What is Vatican Grottoes?

Vatican Grottoes is a massive spread of papal tombs situated right below St. Peter’s Basilica. Aside from the many artifacts, this area is the final resting place of over 90 popes, royalty, and other dignitaries.

Every year millions of tourists make their way to the tombs to pay their respects and get a close look at the papal tombs. We’ve put together a detailed guide to help you plan your visit to the Vatican Grottoes including its history, what’s inside, visitor tips, & more.

Why Visit the Vatican Grottoes?

Inside the Grottoes are the tombs of over 90 popes, a few monarchs, and other church dignitaries, which date back to the 10th century. Other than the tombs, the Grottoes also contain rooms, chapels, and structures, including the marble statue of St. Peter Enthroned, the funerary monument of Calixtus III, the sepulcher of St. Peter, remains of the Old St. Peter’s Basilica, and more. Vatican Grottoes is the most visited place in Vatican City and should absolutely be on your must-see list!

Plan Your Visit to Vatican Grottoes

Where is Vatican Grottoes Located?

The opening hours of the Vatican Grottoes are the same as St. Peter’s Basilica, which is open between 7 AM to 7 PM from April to September and 7 AM to 6 PM from October to March.

Make sure to complete your visit at least half an hour before closing time.

You don't need separate tickets to gain entry into the Vatican Grottoes, as it is included in your St. Peter's Basilica tickets. Opting for a guided tour would be the best option as the expert guide would provide you with detailed information about the monuments and tombs, making it a much more fruitful experience.

It took about 120 years to complete the construction of St. Peter’s Basilica, which included the papal tombs and necropolis below the structure. There are over 100 tombs inside the cathedral, most of which can be found inside the Vatican Grottoes.

Clementine Chapel is the precious gem of the Vatican Grottoes, holding the chest that protects the sepulcher of Peter the Apostle. It makes up the center of the peribolos and is the only part of the cathedral to maintain its original purpose and function. Just like back in the day, people of faith make their way to the chapel to pay their respects. It is believed that the head of St. Peter lay above the tomb towards the back of the monument. The chapel gets its name from Clement VIII, who modified the ancient chapel in 1592.

After the funeral of Pope John Paul II on April 8, 2005, his first tomb was placed towards the north end of the Grottoes, less than 100 feet from the tomb of St. Peter. He was placed in the spot where Pope John XXII previously lay, until he was moved to the St. Jerome Altar on June 3, 2001. A few years later in 2011, John Paul II was declared blessed and moved under the Altar of St. Sebastian. His body was placed in a cypress coffin as part of three traditional coffins that lay together. The outermost zinc casket was encrypted with three bronze plaques and a cross and placed in a larger casket which was shut using nails made of pure gold.

Chapel of the Madonna of Bocciata

The Chapel of Madonna of Bocciata is the oldest in the area around St. Peter’s sepulcher, commissioned by Gregory XIII in 1580. Inside the chapel is an elegant fresco painted by Pietro Cavallini, a renowned 14th-century artist. He called it the “Madonna della Bocciata” because Mary’s face is swollen in the painting. It is believed that a drunken soldier once threw a bowl at the image after losing a game, which made her face bleed.

A massive depiction of the Holy Madonna is present in one corner of the Vatican Grottoes towards the south end. Here you can see Madonna painted in red and black clothes, slightly raising her arms, with an orange halo above her head. This image is surrounded by reliefs of the Doctors of the Church, preserved for many centuries.

Although the Old St. Peter’s Basilica was gravely destroyed, some parts of it remain buried below the new cathedral. Paul V extended the Vatican Grottoes in the 16th century with parts of the old basilica placed on its walls. There are six Archeological Rooms in total containing tombs, frescoes, and other structures from the old cathedral.

A funerary monument of Pope Calixtus III lies at the south end of the grottoes, before the exit. Calixtus was the head of the Church and Papal States in the 14th century until his death. Although his remains were kept at Santa Maria in Monserrato, a funerary monument was built in his honor at St. Peter’s Basilica.

The marble statue of St. Peter is a famous image throughout the world. Located right before the exit of the grottoes, the statue shows the apostle sitting with his arms crossed and his feet adorned with sandals. Almost everyone who visits the Vatican Grottoes is known to perform the gesture of kissing feet of the Apostle.

In between the Chapel with the Tomb of Pius XII and the Chapel of St. Veronica is the beautiful Clementinian Peribolos. The roof of the area is adorned with bright and colorful holy images that stretch along the corridor.

The Georgian Peribolos, unlike the Clementinian one, is worn down with many parts of its walls having fallen off. However, the structure still holds strong even centuries later.

Who is Buried in the Vatican Grottoes?

Although not all popes are buried at the Vatican Grottoes, there are over 90 papal tombs inside. Some of them include Pius VI Braschi, who was captured by the French and died a prisoner in 1799, John Paul I Luciani, whose reign lasted for just 33 days, Adrian IV, the only English pope, and many more.

Other than the papal tombs, the Grottoes are also home to people of historical significance such as the Stuarts, who were pretenders to the English throne and remained in exile since 1717, and the famous emperor Otto II, who passed in Rome at an early age of 28.

Another noteworthy burial is that of the Czech Cardinal Josef Beran, who was arrested in Prague after having worked at the Dachau concentration camp. He went on to become the archbishop of Prague until he was imprisoned once again for being an opposer of communism. After his final release, he became a cardinal in 1965.

Many more significant tombs lie within the Grottoes, each with a unique history.

Map of the Vatican Grottoes 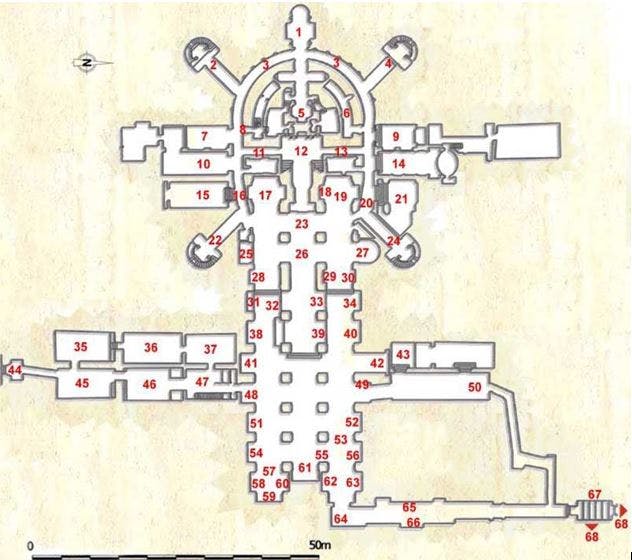 1. Chapel with Tomb of Pius XII

7. Chapel of the Madonna of Bocciata

8. Opening onto the Archeological Remains of the Confessio (ex Chapel of Salvatorello)

10. Chapel of the Madonna of Partorienti

11. Southern Corridor of the Confessio

13. Northern Corridor of the Confessio

14. Polish Chapel of Our Lady of Czestochowa

17. Mexican Chapel of Our Lady of Guadeloupe

19. Chapel of the Madonna between Peter and Paul

21. Chapel of the Patron Saints of Europe

23. Opening in front of the Confessio

29. Tomb of Queen Charlotte of Cyprus

43. Chapel of Our Lady, Queen of the Hungarians

44. Entrance to Scavi from Piazza Braschi

64. Icon of the Madonna Dolorosa and Reliefs of the Doctors of the Church

65. Dividing wall of Paul III and the Remains of two Columns from the Old Basilica

68. Exit from the Grottoes to the Patio

All Your Questions About Vatican Grottoes Answered

Q. What are the Vatican Grottoes?

Under St. Peter’s Basilica is a massive papal burial ground (separate from the Vatican Necropolis) referred to as the Vatican Grottoes.

Q. Are the Vatican Grottoes free to visit?

Yes. The papal tombs are free to visit during the opening hours of St. Peter’s Basilica.

Q. How to visit the Vatican Grottoes?

You can plan your visit to the Vatican Grottoes as part of your visit to St. Peter’s Basilica. It is located below the cathedral, so make sure you head there towards the end of your tour.

Q. Do I need separate entry tickets to Vatican Grottoes?

No. You do not need separate tickets to enter the Vatican Grottoes. Once you enter St. Peter’s Basilica, you can make your way below towards the papal tombs.

Q. Is photography allowed in the Grottoes of the Vatican?

No. Photography is strictly prohibited at the Vatican Grottoes.